Century Service Alert: The Gov. of PA has ordered all non-life-sustaining businesses in PA to close their physical locations as of 8pm on March 19th to slow the spread of COVID-19. Century is complying with this order as we move all employees to work from home. During the transition, we may experience longer hold and response times to all communications. We are also asking that any USPS mail correspondence be uploaded to the MyCentury client portal or sent via email while our physical office building is closed. Thank you for your consideration. Please stay safe and healthy!

We are very proud to share Century company news. These accomplishments highlight the outstanding efforts of our team to enhance Century’s client experiences throughout their debt settlement programs and their overall growth. August 2019 On August 28th at the River’s Casino, Century Support Services, LLC, a leading provider of debt settlement services, was recognized on the Pittsburgh Business Times ‘Fast 50’ as the no.14th fastest growing company on this list.
Read the Century Press Release Century Ranks on the Inc. 5000 for Third Consecutive Year

August 2019 Century Support Services, LLC, a leading provider of debt settlement services, is excited to announce it has been ranked on Inc. Magazine’s prestigious “Inc. 5000” list for the third consecutive year. Read the Century Press Release
Our Inc. Profile 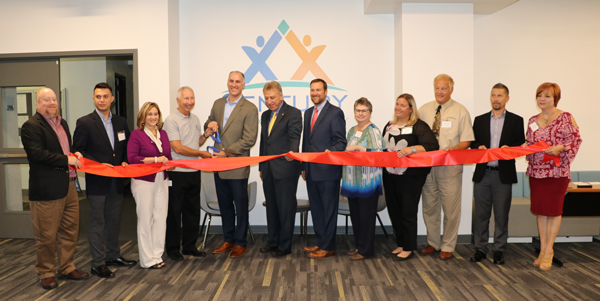 August 2018 Century opened the doors and ‘Cut the Ribbon’ on our newly renovated 34,000 square feet of office space last week. Local government officials, media and community members joined us in celebrating our team, our growth and several awards we have recently received! Read more about the event and Century’s growth. August 2018 We are proud to announce we have done it again… by ranking No. 455 on Inc. magazine’s 37th annual Inc. 500, the most prestigious ranking of the nation’s fastest-growing private companies. Read the Century Press Release Our Inc. Profile

August 2018 Century was awarded one of Western PA’s Best Places to Work by Pittsburgh Business Times. Our team of employees have spoken and after a detailed survey and review process, Century is officially recognized as a Best Place to Work. 2nd Year in a Row Great Place To Work® Certification

February 2018 Independent analysts at Great Place to Work® have certified Century based on extensive ratings provided by our employees in anonymous surveys. Click here to see all of Century’s certification results on the Great Place to Work website. October 2017 The Pittsburgh Business Times, CFO of the Year Awards, honor financial professionals in western Pennsylvania for outstanding performance as corporate financial stewards. Our own Tim Detisch has been honored with the award this year. Join us in congratulating Tim! August 2017 We are proud to announce Century has been ranked No. 859 on Inc. magazine’s 36th annual     Inc. 5000, the most prestigious ranking of the nation’s fastest-growing private companies. With a 3-year revenue growth of 523%, Century was also ranked the 42ndfastest-growing financial services company in Pittsbugh. To read the entire press release, please click here. August 2017 “We are honored to receive this distinguished Top Workplaces award,” said Dan Frazier, Century CEO. “Improving our clients’ financial lives, while creating the best customer experience possible, only occurs when our employees are passionate about their workplace! It is with special appreciation and thanks to all of our Century team members that made this award possible.” February 2017 Century has been certified as a Great Place to Work! This is quite an honor as this certification comes directly from our employees’ feedback. January 2017 Century is committed to doing our part to make Norwin, Pennsylvania a great place to live and work.  Being a Chamber member helps Century spread the word about local career opportunities and stay connected with different industries. January 2017 Century becomes an IAPDA Accredited Service Center and our sales people have all successfully completed the requirements as Certified Debt Specialists. October 2016 Century  has launched a new version of the MyCentury client portal. This version offers our clients new features and more communication resulting in a better client experience while enrolled in our debt settlement program. August 2016 Century is very excited to announce that we have become a BBB accredited member business with an A+ rating.

By entering your contact information onto Centuryss.com you agree to our Terms of Service and Privacy Policy and consent to receive information via telephone call, email and text/SMS message (including through the use of an automatic telephone dialing system and artificial/prerecorded voice, SMS or MMS (text) messages, even if your telephone number(s) is/are currently listed on any state, federal or corporate Do Not Call list). Consent is not a requirement to purchasing the goods or services that Century Support Services, LLC is offering. Standard text message rates and cellular data charges apply. You may opt-out by replying “stop” to any message that you receive. Also, by providing my electronic signature on this Consent to Receive Certain Communications and providing my phone number(s), I agree to indemnify and hold Century Support Services, LLC and Century DR, LLC harmless against any claim, damage, and expense(including reasonable attorneys’ fees) related to any action brought against either for any communication to such number.